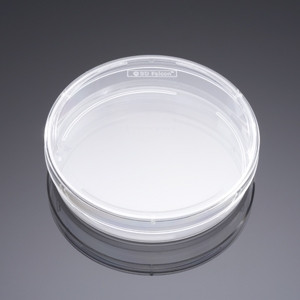 For some applications, the use of a combination of ECM proteins, such as laminin (LM) and fibronectin (HFN) or LM and attachment factors such as poly-D-lysine (PDL) or poly-L-ornithine (PLO), has been shown superior to the use of either alone. Corning BioCoat™ PDL/LM and PLO/LM Cellware is suitable for culturing many different types of peripheral nervous system (PNS) and central nervous system (CNS) networks and is useful for promoting neural cell attachment and differentiation. Corning BioCoat LM/HFN Cellware provides an in vitro environment that promotes cell attachment and extensive process formation.

The culture dish features treated polystyrene with a uniform application of poly-D-lysine and laminin.