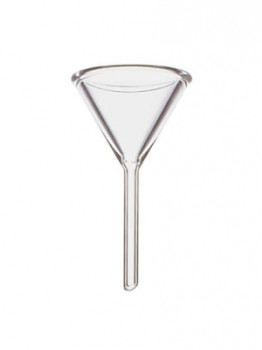 Kimax® funnel constructed with heavy uniform walls, molded rims, and fire polished stems to give a long service life. Borosilicate glass funnels have a high resistance to chemical attack and mechanical and thermal shock. The 58° funnel angle is formed to an exact angle for rapid filtration. A piece of filter paper, when folded to form the filtering cone, forms a precise 60° angle. If the funnel is also 60°, as are the vast majority, then the only effective filtering area is down near the tip. The exclusive Kimax® 58° funnel promotes faster, more effective filtering because the cone is suspended by its uppermost edge, leaving most of the conical area for filtration. Designed from ASTM Specification E1095, Type 1, Class A requirements.